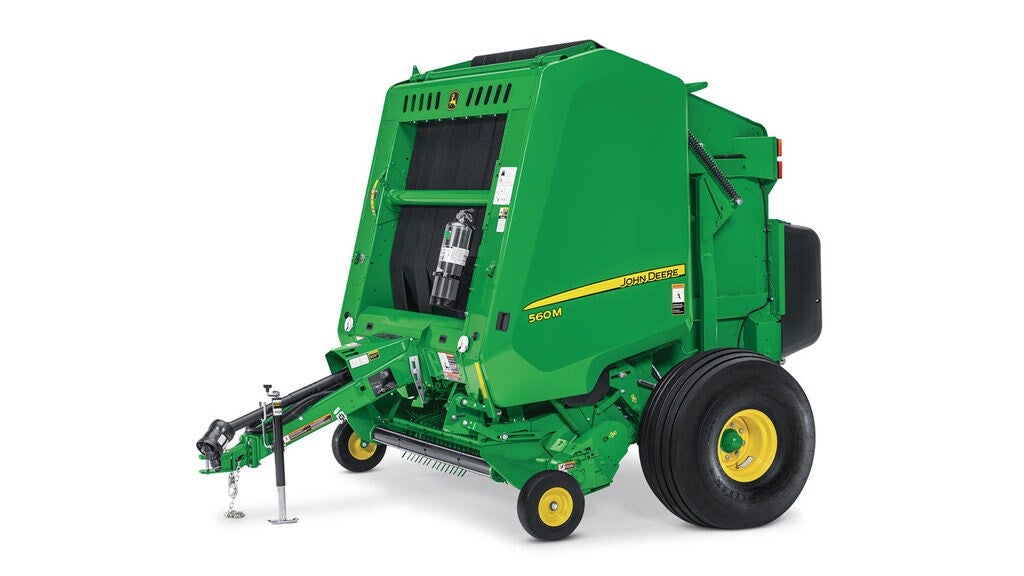 All the highly valuable features that the John Deere 569 Round Baler promised were kept for the 560M Round Baler. Key features include:

The key specs for both John Deere round balers are also very similar. The bale diameter ranges from 32 to 72 in., the weight of a full-size bale in dry crop is 2,200 lbs., and there is a 2,200 lbs. maximum weight allowed for silage bale. The baler length is 12 ft. and the height is 9 ft. Both the 569 and 560M include eight belts at triple weave width. The density is controlled through an adjustable hydraulic system. There is an electronic display on the monitor to indicate the bale size on both models. The regular pickup width is 5 ft., and the mega wide pickup is 6.4 ft. wide. There are 120 regular teeth and 8 mega teeth. The wrapping system is controlled automatically, there are two twine arms, and the twine ball capacity is eight. Both include slip clutch drive protection, a PTO speed of 540 or 1,000 rpm, and a constant velocity powershift. All these specs are shared between the models to maintain quality.

What are the key differences between the 569 and the 560M Round Baler?

So, with all the similarities between the two models, is there anything left that is different? The answer is yes, and although the changes are small, they make a significant difference in the functionality of your John Deere round baler. John Deere analyzed every detail of the 569 Round Baler and improved the model in every way possible. The result is a highly functional, dependable, and efficient new model called the 560M Round Baler.

Cosmetic differences are often overlooked, but when farmers experience the changes the 560M round baler is capable of, the upgrades seem necessary. The first difference is the top of the baler. The John Deere 569 Round Baler features a flat top, but the John Deere 560M Round Baler has a slotted design. This difference allows the air to pass through and reduces the wind and drag.

An important safety upgrade was the moving of the yield sign from the net wrap box on the 569 to the top on the 560M. This allows for better visibility when travelling. The drive line cover also saw improvements when the flat design was changed to the rounded, which prevents the buildup of materials onto it. The doors and handles were also changed for a more eye-appealing layout and easier access.

Yes, the John Deere 560M Round Baler is ready for anything, including wet and heavy crop. Its powered cross auger helps keep wet and dry hay from traveling up the belts and reduces crop buildup around the 13 rolls in contact with the forming belts. For greater reliability, John Deere engineers kept the larger bearings, shafts, and flanges. To prevent wrapping in moist, thick hay, a starter-roll scraper knife is mounted directly in front of the starter roll. Auxiliary take-up roll prevents belt crossover or flipping in damp conditions. These silage options are only available for John Deere’s M-models, like this John Deere 560M Round Baler.

Where can I buy new John Deere Balers?